Previous articles in this series:

In the last article, we built a baseline classifier for street names. The results were a bit disappointing at 55% accuracy. In this article, we’ll add more features, and streamline the code with scikit-learn’s Pipeline and FeatureUnion classes.

I learned a lot about Pipelines and FeatureUnions from Zac Stewart’s article on the subject, which I recommend.

There’s a great paper called A few useful things to know about machine learning by Pedros Domingos, one of the most prominent researchers in the field, in which he says:

So far I’d only used n-grams. But there were other sources of information I wasn’t using. Some ideas I had for more features were:

How to incorporate these into the previous code? Let’s look at the code we needed to create the n-gram feature matrix:

To add the new features, what we’re looking at is:

This may not seem like a huge deal, but it is pretty repetitive, opening ourselves up to the possibility of errors, for example calling fit_transform on the testing data rather than just transform.

Another way to think about the code above is to imagine a pipeline that takes in our input data, puts it through a first transformer – the n-gram counter – then through another transformer – the SVC classifier – to produce a trained model, which we can then use for prediction. 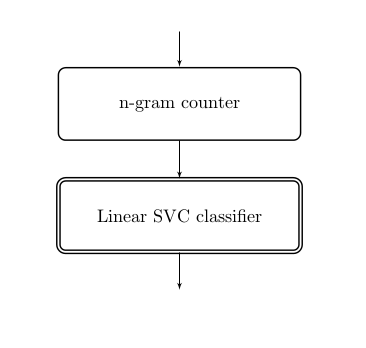 This is precisely what the Pipeline class in scikit-learn does:

Notice that this time, we’re operating on data_train and data_test, i.e. just the lists of road names. We didn’t have to manually create a separate feature matrix for training and testing – the pipeline takes care of that.

Now we want to add a new feature – average word length. There’s no built-in feature extractor like CountVectorizer for this, so we’ll have to write our own transformer. Here’s the code to do that. This time, instead of a list of names, we’re going to start passing in a Pandas dataframe, which has a column for the street name and another column for the “road tag” (Street, Avenue, Jalan, etc).

Unless you’re doing something more complicated where something different happens in the training and testing phase (like when extracting n-grams), this is the general pattern for a transformer:

Now that we’ve created our transformer, it’s time to add it into the pipeline.

We have a slight problem: we only know how to add transformers in series, but what we need to do is to add our average word length transformer in parallel with the n-gram extractor. Like this:

Notice that the first item in the FeatureUnion is ngram_count_pipeline. This is just a Pipeline created out of a column-extracting transformer, and CountVectorizer (the column extractor is necessary now that we’re operating on a Pandas dataframe rather than directly sending the list of road names through the pipeline).

That’s perfectly okay: a pipeline is itself just a giant transformer, and is treated as such. That makes it easy to write complex pipelines by building smaller pieces and then putting them together in the end.

So what happened after adding in all these new features? Accuracy went up to 65%, so that was a decent result. Note that using Pipelines and FeatureUnions did not in itself contribute to the performance. They’re just another way of organising your code for readability, reusability and easier experimentation.

If you’re looking to do hyperparameter tuning (which I won’t explain here), pipelines make that easy, as below:

Ultimately, after adding in more features, adding more data, and doing hyperparameter tuning, I had about 75-80% accuracy, which was good enough for me. I only had to hand-correct 20-25% of the roads, which didn’t seem too daunting. I was ready to make my map. That’s what we’ll do in the next article.